Wet Bike For Sale – Where You Might Still Find One? [Video]

Home/News/Wet Bike For Sale – Where You Might Still Find One? [Video]

Wet Bike (also known as the Suzuki WetBike) was something we’ll never forget. It was so strange seeing people using them in the late 1970s to get around on the water.

I think James Bond was even seen driving one in the movies, something many men have probably imagined doing themselves!

There are all kinds of watercraft being built today that can go a lot faster than the Wet Bike. But we doubt that any have the elegance and grace of a Wet Bike! Can you show me one that gives you the freedom and thrill you get when riding a motorcycle? I don’t think you can!

And why not? Because the Wet Bike was built with front steering, a feature no other personal watercraft has ever had. It’s the only vessel that turns with so much maneuverability and there’s nothing quite as exciting!

Even though it got a lot of attention, mostly due to its looks, it’s pretty much been forgotten. You rarely see them on the water!

Despite the initial excitement and gaining fame in movies, the Wet Bike is now a faded memory for most.

But, a small cadre of fans is still around doing what they can to keep the memory alive. They still have them and after all these decades, these fans are still getting around on their WetBikes:

Since so many fans of the Wet Bike still exist around the world, let’s look at how this all began.

History of the Suzuki WetBike

The first Wet Bike came out in 1978, way before PWCs were being widely used. This was just a few years after the introduction of Kawasaki’s Jet Ski and Bombardier’s Sea Doo.

Because of their Suzuki engines, this watercraft was known as the “Suzuki WetBike” on the market, but in fact Spirit Marine, a subsidiary of Arctic Enterprises (now Arctic Cat) was the manufacturer of the Wet Bike.

This was before they launched their other PWC brands called Tigershark. At that time the Wet Bike was their biggest seller!

Early ads touted this watercraft as the “Wet Bike Watercycle,” describing it as a motorcycle on water. The ads said that it offered the thrill of boating, motorcycling and waterskiing all at once.

Throughout the years that Wet Bikes were being manufactured, from 1978 through 1992, it kept changing. These were mostly due to technical advancements, upgrades and added safety features.

There were two models manufactured, the Silver Streak and a much sportier model called the Tomcat.

Just as with the PWCs of today, the Wet Bike’s engine was placed under the seat.

They were powered by 50 HP, 723 cc 2-stroke Suzuki engines equipped with dual Mikuni carburetors. This enabled this tiny watercraft of slightly over 7 feet to reach speeds of up to 32 mph.

Major changes came in 1985 when they got 60 HP, 798 cc naturally aspirated Suzuki engines. This raised the Wet Bike’s performance dramatically. It was now faster than any other personal watercraft being sold at the time!

In 1986 it started being made with a Metton body unit, which was strong, yet extremely lightweight. These changes enabled the Wet Bike to reach speeds of up to 38 mph. The electric starter and bilge pump were standard features and the jet pump had 500 lbs. of thrust.

Every model has a very narrow rectangular seat. Although the seat design looks great, it is not at all comfortable for long rides. But, the thin body of the bike allows riders to easily lock in their position when riding. They can more intuitively lean into turns than if the body was even a little wider.

Right beneath the seat is a 9-gallon fuel tank. This can take you quite far when totally filled up! Although you might regard the Wet Bike’s top speed of just 38 mph as a drawback, this definitely saves fuel. Since it cannot reach extreme speeds, fuel lasts a whole lot longer.

All in all, the WetBike offers some really cool features. While these features may be fairly common these days, this was all considered top-of-the-line way back then.

A Wet Bike combines the best of a motorcycle with the best of a PWC. It’s a cross between the two. A jet pump propels the Wet Bike, just like other types of personal watercraft.

What’s different is that the Wet Bike does not have a hull, like other watercrafts or boats. Instead, the Wet Bike rides on hydrofoils, installed at the front and back.

Unlike other personal watercraft, which steer from the rear, the Wet Bike steers from the front. The hydrofoil at the front of the Wet Bike is what turns and steers it. This is much the same as how the front wheel turns on a motorcycle to steer it.

The Wet Bike’s steerable front ski, attached with a suspension link, provides a radically different ride. There has never been anything like it on the market. Riders can lean into it as it turns, just like a street bike.

They’re not easy to ride, much more difficult than most personal watercraft. You need to have really good balance to stay in the saddle. You’re partially submerged under water when you start, but by the time you reach 10-15 mph it rises. This varies though, depending on your weight and the conditions of the water at the time.

Depending on the year it came out, most Wet Bikes could reach speeds from 32-38 mph. This may seem slow compared to the types of watercraft currently out there that reach 65-67 mph. But back in those days, that speed was quite impressive.

Even today, it’s pretty surprising that such a weird looking PWC could go that fast!

Where is the Wet Bike now?

Unfortunately for fans, this PWC is no longer being sold on the market. After having been in production for more than a decade, it ceased being manufactured in 1992. A number of factors led to its demise. The main ones were that it was more difficult to transport and ride than other PWCs. It was also much harder to launch because it didn’t have a regular hull.

The legacy of Wet Bike still lives on in a number of different ways. Its motorcycle-like feel ended up becoming the norm throughout the industry. Its unique ignition system would also be adopted in time across the industry.

The Internet has also been keeping the Wet Bike’s legacy alive as well. All you need to do is go online to YouTube to see many loyal fans still enjoying their Wet Bikes.

To prove how popular it was, the Wet Bike was featured in several movies over the years.

The Wet Bike made its first film debut in 1977, in the James Bond movie The Spy Who Loved Me. Right before the movie ends, you can see Bond riding a Wet Bike (the Spirit Marine prototype) to his enemy Karl Stromberg’s lair, which was the submerged Atlantis fortress. In the film, bond calls the Wet Bike a “Q Gadget.”

The Wet Bike appeared on film again in 1982, in an episode of CHiPs called Overload. After a short jaunt on the Wet Bikes for fun, Jon and Ponch ride their Wet Bikes to chase after microchip thieves escaping in a speedboat. You can see a sign in the background advertising Wet Bike Rentals for $10 an hour or $75 for an entire day.

The Wet Bike again appeared on film in the 1986 movie Police Academy 3: Back in Training. In the film you see police riding Wet Bikes and Kawasaki jet skis while chasing after thieves escaping in speedboats. In the 1983 comedy Go for It, you see Terence Hill pursuing Susan Teesdale’s character on a Wet Bike.  In the 1990 film Red Surf, you can see a gang of surfers using Wet Bikes to transport cocaine.

If you are dying to own a WetBike, you may get lucky and find one in the second-hand market.

If you would rather buy something brand new, you’re out of luck. You will need to find another type of watercraft as the Wet Bike is no longer in production.

It’s been replaced by Kawasaki’s Jet Ski, Yamaha’s WaveRunner, Bombardier’s Sea Doo and watercrafts from Krash Industries. These are the 3 most popular brands currently on the market. You might also consider getting Krash Industries’ latest thrilling freestyle/freeride watercraft.

Over the years there have been quite a few jet ski manufacturers that have simply come and gone, like ArcticCat, Honda, MasterCraft and Polaris.

To better understand the manufacturer/brand name relationship,we at JetDrift made a small chart detailing the leading manufacturers of jet skis and their brand names, as follows:

Aside from their brand names and the term “jet ski,” the most appropriate names for these types of machines are “personal watercraft” or just “watercraft.” Many just use the initials “PWC.” 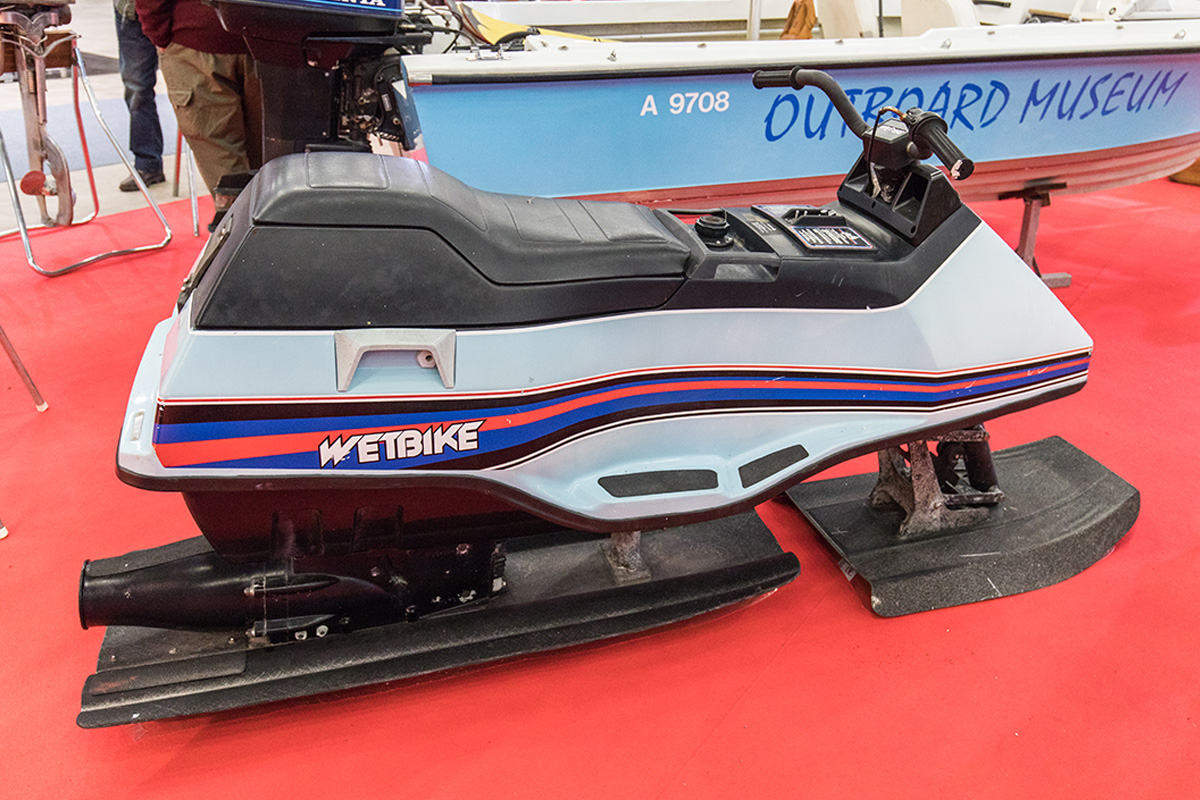 Wet Bike for Sale – are they worth buying?

Interestingly, there is still a demand for Wet Bikes. They are now a cult classic within the watercraft community, which keeps the demand going.

Whether it’s worthwhile to you depends on your desire to have something truly unique, a novelty from the past. If you think you would get the thrill of your life riding, we say go for it.

You can find a Wet Bike for sale, but the challenge is finding one that actually runs well.

The best places to find one in fairly good condition would be Boats.com, PWC Trader, Craigslist or eBay.

Not surprisingly, you can find more Wet Bike forums on the internet. What’s more,there’s an entire website devoted to this PWC. You should also be able to find Wet Bikes for sale here, as well as interesting information on these watercrafts.

But before buying one think about how you’re going to transport and launch it. It might be more complicated than other types of PWCs. You will need a trailer and other accessories like goggles, life jackets and more.

Count on spending $1,000 to $5,000 for a Wet Bike, although you could get lucky and find one for less. Like most things, the price will depend on how old it is, its condition and the location. Your challenge will be that it will likely be at least 30 years old.

In addition to the above expenses, you’ll need to have money for repairs, since it will likely need some. You’re also going to have to dig around for replacement parts – but you can start your research on eBay.

Overall, getting a WetBike is certainly worth the trouble and expense for thrill seekers. There is nothing like the fun of riding one.

This is why these PWCs are on so many bucket lists!

Are you interested in the new watercrafts? You can find the newest models by searching here!

What is Launch Control on a Jet Ski? [Explained]

Do Jet Skis Have Cruise Control? How Does It Work? [Video]

Jet Ski Speedometers: How Accurate Are They? [Video]