Do jet skis have hull numbers? – This is a typical question asked by many owners, and with good reason.

Just like cars or motorbikes, jet skis also have serial numbers that uniquely identify the jet ski. Since every jet ski has many serial numbers, it can be confusing at first.

Moreover, it’s also very important not to confuse serial numbers with the registration numbers, which are issued by your state. If you want to learn more about a jet ski’s serial numbers, this post is for you, as we, at JetDrift, have gathered all the important information on the topic!

Do Jet Skis Have Hull Numbers?

Yes, every jet ski has a hull identification number, which is used to uniquely identify the jet ski. Since jet skis are considered boats, the federal law requires hull numbers on every jet ski in accordance with legal requirements. The hull numbers, just like the engine serial numbers, are assigned by the manufacturer.

What is a HIN Number On a Jet Ski?

Where is the Hull Number On a Jet Ski?

You can find a jet ski’s hull number on the top on the rear platform. You can also find it on the jet ski’s registration, title or even the insurance certificate.

How do You read a HIN number?

The hull number consists of 12 digits, mixed with letters and numbers. Simply explained, the first three letters identify the manufacturer, the second five numbers are the hull serial number, the next two digits refer to the date of manufacture, while the last two numbers are the model year.

For a better understanding, please check this image below: 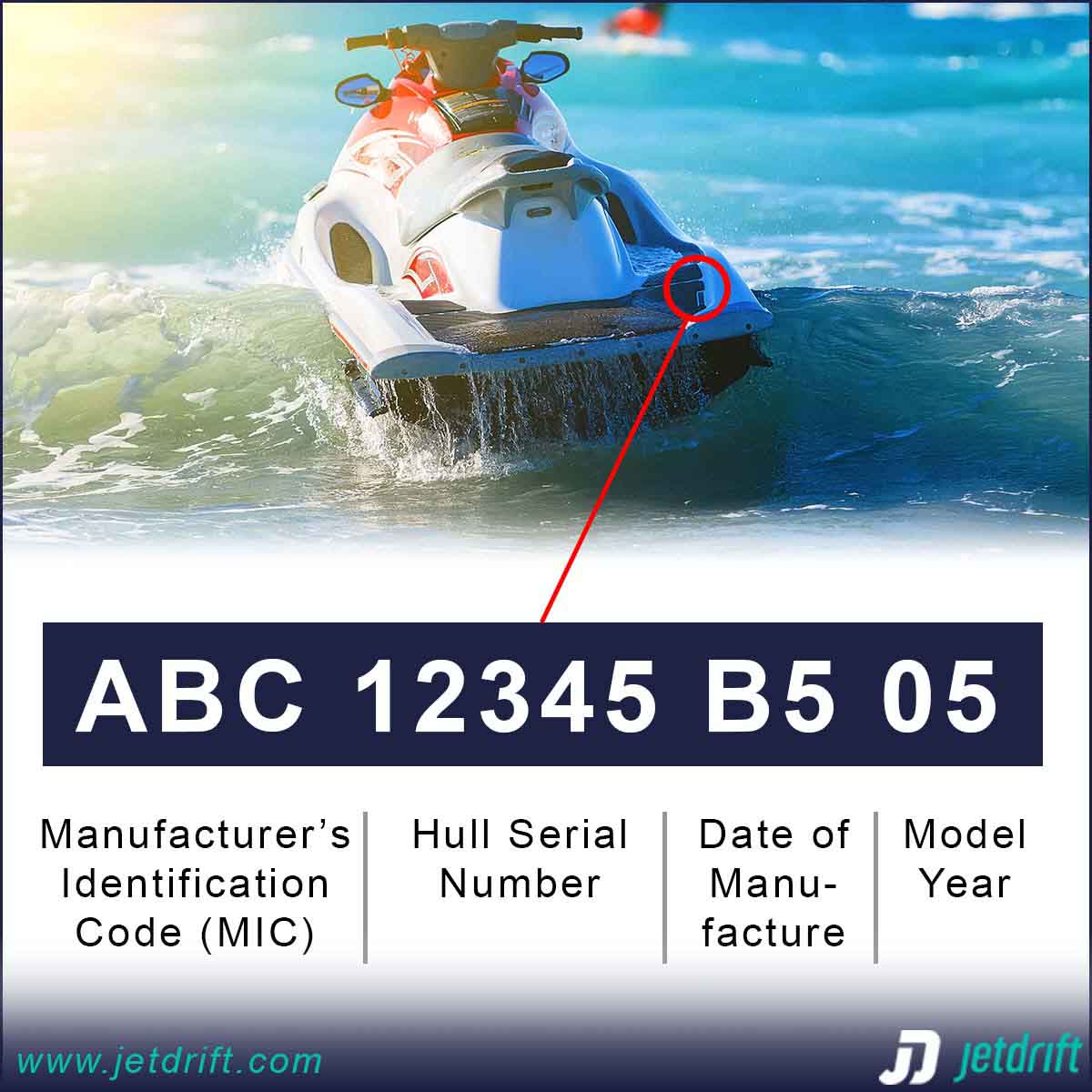 The letter in the “date of manufacture” section refers to the month. As these characters could be tricky, for your convenience, we’ve included this key to read the months properly:

What are Hull Identification Numbers Useful For?

Just like the car’s VINs, the hull identification number is used to identify each jet ski. You will also use this number to register your jet ski, track its history or to order parts. Additionally, if your jet ski is stolen, the authorities will require the HIN number, as well as the engine serial number to trace your jet ski. Because of this, it’s highly recommended to record these numbers and keep them in a separate place.

Where Is the Serial Number on a Jet Ski?

Where is the Serial Number on a Jet Ski?

Where is the VIN Number on a Jet Ski?

How Can You Tell in What Year a Jet Ski Was Made?

You can find the jet ski’s HIN number on the top of the rear deck and the EIN number on the engine block. You can get a lot of important information from the HIN number like the manufacturer, year of production and the model year. It’s recommended you record these numbers and keep them separate. You may need them if you want to order new parts, want to sell your jet ski, or in case of theft.

———-
Related Articles:
How to Register a Jet Ski [Registration Tool and Guide]
Is a Jet Ski a Boat? Understand the Laws That Apply!

What is the Hull of a Jet Ski? What’s it Made of? [Video]

What do Sponsons do on a Jet Ski? [Video]

10 Surprising Things You Can Do on a Jet Ski [Video]

error:
We use cookies to ensure that we give you the best experience on our website. If you continue to use this site we will assume that you are happy with it.OkNoPrivacy Policy