Home/News/Do Jet Skis Have Brakes? – Learn How to Stop! [Video]

Do jet skis have brakes? That’s the question asked by many beginners.

Others who prefer different brands might like to know more about the Yamaha WaveRunner braking system as well as Sea-Doo brakes.

The short answer is yes, there are many personal water craft (PWC) models on the market that are equipped with brakes, while others are still manufactured without them. Finally, it always depends on the models and manufacturers.

In this post, we’ve collected information about PWC braking systems from the main manufacturers. You can learn how they work as well as what the pros and cons are of each system.

Additionally, you can discover and compare new-to-the-market and currently available PWCs with brakes here.

Why do PWCs Need Braking Systems?

In the past, watercraft were much smaller, and being honest, far less powerful.

Below, you can check out this chart about the Sea-Doo’s flagship performance model’s horsepower increase. The horsepower ratings went from 55 HP to 300 HP over the years! 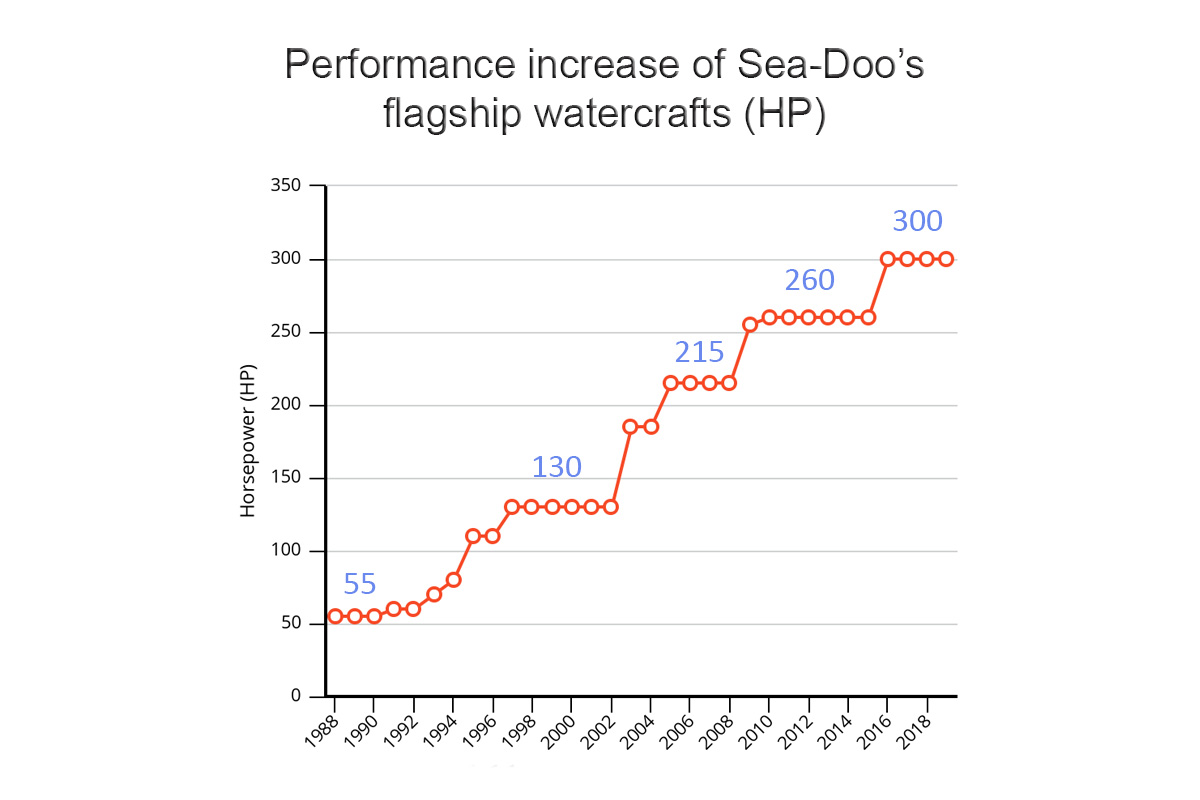 This means these watercraft became increasingly faster on the water.

Finally, many current PWC models can run as fast as 67 mph in stock condition.  But don’t forget the modified watercraft which can hit 120-130 mph!

As you might imagine, stopping the craft on the water without braking is not easy at these speeds, which leads to many accidents, especially in the case of inexperienced riders.

On these PWC models without brakes, your only chance to stop is if you cut the power and wait until the PWC is slowed down by the water.

But it’s also good to know that without throttle, you can’t steer the watercraft! Are you wondering why?

For a proper answer, we have to take a short look at the PWC’s propulsion system.

PWC models are all propelled and steered by a jet drive. This is a unique system where the water is forced through a “steering nozzle” that can be found at the back of the PWC.

As you can see, if you release the throttle or shut off the engine completely while the whole PWC is in motion, you lose steering control! If you do this, the PWC will move in the same direction you move the handlebar, but in vain.

So keep in mind; even if you shut off the engine or release the throttle, the PWC won’t stop immediately. Even if the model is equipped with brakes, it still needs plenty of room to stop!

This is a very dangerous feature of any watercraft and can lead to serious injuries in case of an inexperienced operator:

Because of this, to make the watercraft more safe, manufacturers started to work on PWC braking systems. Finally, Sea-Doo released its iBR system in 2009 and Yamaha also introduced the Yamaha RiDE system in 2014.

How do PWC Brakes Work?

Are you interested in how PWC brakes work? Here we’ll explain the basics of these systems.  Then we can go into the details of each manufacturer’s braking systems as well.

If we want to explain how a PWC brake works, we can say that these systems turn the water jet forward to increase reverse thrust. It means the jet from the nozzle will squirt forward, unlike the regular backward direction. For this purpose,they use a metal reverse gate, which moves directly behind the pump.

Long story short, the braking system on a PWC will slow you down, but what it actually does is to put the watercraft into reverse, and this will eventually result in deceleration.

That’s why the brake lever and the reverse lever are the same. It means if you use the brakes, you’ll slow down and after the PWC stops, it will reverse if you don’t release the lever.

These systems are typically not just only braking systems, but can move the PWC in reverse or can even turn it around 360 degrees in one place. It makes docking and launching much easier for you! You’ve probably heard this term many times, but are you wondering what the Sea-Doo iBR is exactly?

The Sea-Doo braking system, known as iBR – Intelligent Brake and Reverse, was the first PWC braking system ever on the market. Sea-Doo iBR was designed for several different functions.  It’s not just a brake and reverse system, but a variable trim system at the same time.

You can engage neutral, forward and reverse while both hands are on the handlebar, which makes the riding experience smooth, safe and hassle-free.

How efficient is the iBR in case of an emergency stop? According to the manufacturer, using the iBR braking system can cut your stopping distance in half!

You can discover and compare the current Sea-Doo models with iBR here.

How Does Seadoo iBR Work?

Let see what Sea-Doo says about iBR and its handling in their manual:

“Operators of iBR equipped personal watercraft will find a brake lever on the left handlebar that controls the braking system.

The iBR braking system works by cutting power delivered by the engine, dropping the jet nozzle reverse gate, and then reapplies power to increase reverse thrust. Use of iBR significantly reduces stopping distance of a personal watercraft.

Intelligent Brake and Reverse works in concert with what Sea-Doo calls Intelligent Throttle Control (iTC) to improve control and maneuverability of their PWC products.

An added feature found in the iBR is that once the craft is stopped, squeezing the iBR lever puts the watercraft into reverse, which can facilitate docking.”

How do You Reverse a Seadoo?

You can reverse a Sea-Doo simply using the iBR braking system. Just pull the left-hand lever until the Sea-Doo slows down and stops completely. If you don’t release the lever, the Sea-Doo will go into reverse automatically.

When operating reverse with the iBR system, the Sea-Doo will rotate in the direction the handlebar is turned to.

How do You Override the iBR on a Seadoo?

If your Sea-Doo is equipped with iBr, you can see that the gate (bracket) hides the whole propulsion system. It means it’s much harder to access it if your pump sucks up a rope or debris from the water and you want to remove it, or if general maintenance is needed.

To solve this issue, you have to override the iBR on your Sea-Doo, which means you can move the gate up and down using the VTS control buttons. Doing this overwrite process is more or less the same on every Sea-Doo model, but for proper guidance, always check your owner’s manual.

Once you’ve overridden it, you can move the gate up and down in its full range of motion. Also, note that you can’t override your iBR if the engine is running!

You can see the process in this tutorial video:

To compete with Sea Doo’s brake, Yamaha introduced its own PWC brake, the  Reverse with intuitive Deceleration Electronics (RiDE) system.

The RiDE offers similar beginner-friendly and safe handling like the Sea-Doo’s iBR.

You can discover and compare the current Yamaha WaveRunner models with RiDE systems here.

Do Jet Skis Have Brakes?

When it comes to Kawasaki, unfortunately, this company still offers their Jet Skis without brakes. Despite seeing the competitor’s user-friendly brake and reverse systems, Kawasaki has not made this development yet.

You may also be wondering if Kawasaki jet skis have reverse?

The answer is yes; Kawasaki jet skis have reverse, but just mechanical reverse only. It means you have to stop your Jet Ski first, then to engage reverse, you have to pull the reverse level.

As you can see, there are many PWC models on the market that are equipped with braking systems.

Introduced in 2009, Sea-Doo’s iBR was the first brake system on a watercraft ever. If you’re interested in the current Sea-Doos with iBR, you can find these models here.

Yamaha WaveRunners also have their own braking system, known as RiDE. You can discover the current WaveRunners with RiDE system here.

Unfortunately, Kawasaki jet ski models have no brakes, which means you only have a manual reverse on every new jet ski model.

If you’d like to try these models on the water, don’t hesitate to visit a PWC rental outlet!

What is the Yamaha RiDE System? [Video]

What is the Yamaha RiDE System? [Video]