Continue reading in order to find out more about the current Sea-Doo models and the confusion associated with the watercrafts’ different names.

Thus a huge variety of different names creates massive confusion about what the vessel is called, what are brand names and what are just basic general terms.

Even services contribute to this confusion by posting ads like “Sea-Doo jet ski for rent” or “Sea-Doo Jet Ski for sale”.

The root of all evil and perhaps the most valuable information that is not at all widely known is the fact that “Jet-Ski” is a registered trademark of Kawasaki.

It is often the case where one brand of some product is so popular that the trademark begins to be widely accepted and used as the generic name of the product. This is exactly what happened with Kawasaki watercrafts.

In the 80’s and 90’s, the Kawasaki Jet Skis were extremely popular and it was the best-known brands of watercrafts.

This resulted in the trademark term of the brand to become so generally used even legal documents and laws regarding watercrafts sometimes refer to them as “Jet Skis”.

It is very important to note, however, that no matter how common this term becomes and how widely is used by the public, Kawasaki’s competitors and other manufacturers of watercrafts can absolutely not use the term while advertising their own watercrafts.

This is because the term “Jet-Ski” is a registered trademark of Kawasaki and if any competitor uses it, they will face legal charges. This is the reason why customers will never find a Sea-Doo Jet Ski in the market.

The manufacturer of Sea-Doo is the
Bombardier Recreational Products (BRP) Inc.
while the term “Sea-Doo” is the
brand name of their watercraft line.

To further clarify this confusion regarding brand names, manufacturers and generic names, we, at JetDrift, have created a small summary table:

Other than the brand names and the term “jet ski”, the most common terms used for these machines are “watercraft” or “personal watercraft” which is often shorted to just “PWC”.

In the Sea-Doo fleet, you can find only “sit-down” watercrafts with a capacity of no more than 3 passengers.

In 2004, Sea-Doo released a model called 3D, which was a transformable model. It enabled the rider to ride it in a stand-up position as well as a sit-down. However, this model has long been discontinued.

A little history of  Sea-Doo

It all started with snowmobiles manufactured in a garage in Valcourt.

Joseph Armand Bombardier invented and granted a patent for a vehicle that can run on snow in 1937.

Over time, he developed new models and better to finally establish his company in 1942. The company then released its first Ski-Doo Snowmobile in 1959.

In 1963, Laurent Beaudoin (Mr. Bombardier’s son in law) joined the family business, and he was named elected as president in 1966 and chairman and CEO of the company in 1979. In 1967, Beaudoin dreamed of putting their Ski-Doo on the water.

A year later, in 1968, the company released its first personal watercraft with the title “Bombardier Sea-Doo”.

The watercraft was designed by Clayton Jacobson II, who is the inventor and developer of the Kawasaki Jet Ski watercraft as well. Jacobson, however, used a jet pump to drive the vessel rather than an outboard motor which was a unique innovation at that time.

A year later, however, because of continuous problems like overheating and inefficiency, the engine was replaced with a 367 cc water-cooled engine.

As the company’s focus was mainly on the booming snowmobile market, production of Sea-Doo model was paused in 1970 up until 1988. In 1988, the Sea-Doo watercraft was re-introduced.

This time, it arrived with an innovative V-Hull design and was powered by a 580 cc Rotax engine.

Two years later, another milestone was achieved and the first Sea-Doo GT, a three-seater watercraft, was introduced. This model was finally able to legally tow waterski while offering seats for the driver, the spotter, and skier at the same time.

Additionally, the GT was the first model what arrived with a mechanical reverse system.

In the following 20 years, newer, improved models kept arriving with increased performances and dimensions. This is why Sea-Doo is one of the market leaders in this industry today. In fact, they had more than 45% of the market share among other PWC brands in 2016.

You can view this video to learn more about the History of the Sea-Doo models from 1988-2013:

In today’s market, you can choose from several Sea-Doo models based on your needs.

There are 21 different models on the market currently, which is the biggest fleet from any manufacturer. The prices also vary widely, starting from as low as $5.399 up to as much as $17.099.

If you would like to consider any of these current models, you can start here. Use our tool to browse and compare the models head to head to help you better understand the specifications and dimensions.

You can even make comparisons with the competitor’s models. Because these models are classified in different categories, it makes it easier for buyers to make their purchase decisions.

There are many factors and specifications that vary from category to category. These include:

Let’s further take a look into each category of Sea-Doo watercrafts and learn more about the models one by one! You can also check a short review video about the Sea-Doo 2019 model Line here:

Overtime, as the trend of riding PWCs became more and more popular, the sizes of the watercrafts became bigger and bigger.

Many buyers and enthusiasts, however, began craving the original small and nimble watercrafts that provided greater opportunities for fun in the waters.

Sea-Doo saw this opportunity and took it. They soon released their new Spark watercrafts in 2014.

This was the birth of the new category of watercrafts; the Rec-Lite. The watercrafts in the Sea-Doo Spark series are the smallest in size and in price as compared to all currently available watercrafts.

Their lightweight and dimensions make these models nimble and really fun to ride. Additionally, you can find some super cool features in the TRIXX which can be used to perform some amazing tricks.

It would be correct to say that they have brought back the old feelings of riding a watercraft.

Their light weight also means that these watercrafts are really maneuverable on the water and also more convenient to store.

You can store them even on a boat platform and they can also be towed conveniently by a small car.

It should be noted that the smaller dimensions also come with smaller engines; you can expect a 60-90 HP in this category with a top speed of around 40-50 mph. While they aren’t the fastest Sea-Doo models, they are safe for even children.

Perhaps one of the biggest advantages associated with this category is that these are the most affordable models and that they incur the most reasonable running costs. You can freely expect extremely low fuel consumption numbers.

The following models belong to this category: 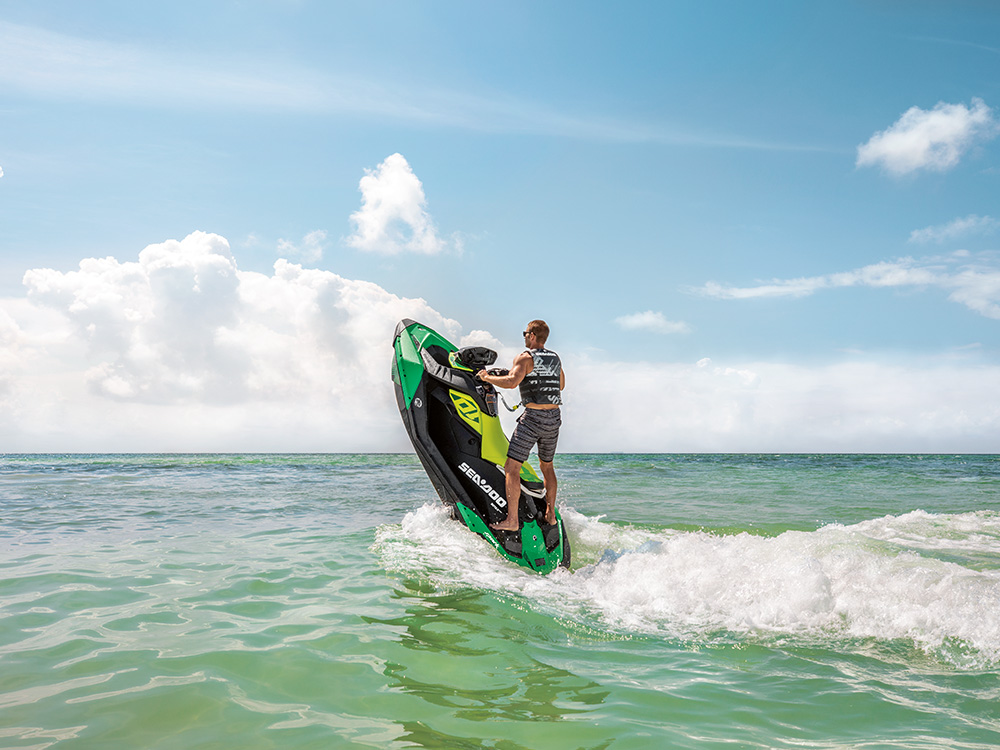 Hands down, the Recreation watercrafts are the most popular models.

They also happen to be the best choice for beginners. This is because they are still easy to handle, have larger and more stable hulls with only around 90 HP to 155 HP engines.

This means greater stability, and more rider and gear capacity for you along with top speeds around 40-55 mph max.

One major advantage of these models is that they come with the Sea-Doo IBR (Intelligent Brake and reverse) system that helps make the whole experience better for a beginner.

It provides essential assistance to first-time riders and that is what makes these models safer and more consumer-friendly. You can check a short video about how the Sea-Doo IBR system works here:

The best models in Sea-Doo’s Recreation category include:

Don’t hesitate to click on the names to discover the models’ specs, pictures, videos and much more!

The Touring category of the Sea-Doo models is the same as the competitor Yamaha’s Luxury category.

In both categories, you can find the most convenient models with the best available extras. These come with 155HP to even 300HP supercharged engines.

The touring models from Sea-Doo are:

The performance category is the prime class of watercrafts.

There is really nothing that compares to these in terms of extravagance, luxury, space and even price tags. These models arrive with the largest hulls, and with 230HP and 250HP supercharged engines, and the best power to weight ratios.

You can expect the highest top speeds (even 67-70 mph) and the best acceleration numbers from these models which is why these are not recommended for beginners.

On the other hand, if you do have prior experience of riding a watercraft and if you have the budget, this category could be the perfect choice for you. Additionally, all of these models come with the most number of extras and features, including the RIDE system by default.

Here are the 7 fastest performance watercrafts by Sea-Doo on the market to discover: 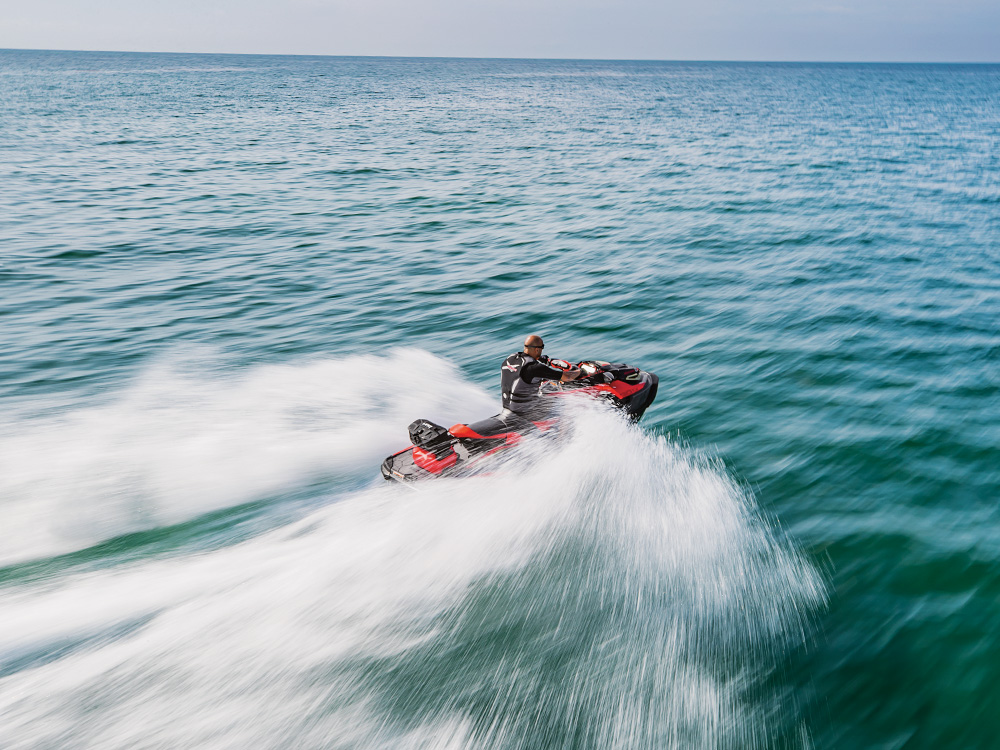 and Sport Fishing what is a special model for PWC fishing:

If you can’t decide which Sea-Doo watercraft to buy and would like to ride different Sea-Doo models beyond the test rides, you can do so easily at any watercraft rental services.

It is important to note, however, that every “Sea Doo jet ski rental service” offers just Sea-Doo watercrafts for rent. This means you can’t expect to find any Kawasaki models available for rent there.

You can also make good use of our infographic step by step rental guide along with the other in order to avoid unethical practices of some rental companies.

Perhaps the first and the most important takeaway would be that there is no such thing as a Sea-Doo Jet ski, a Yamaha jet ski or a Honda jet ski. The term “Jet Ski” is exclusively the registered trademark of the company Kawasaki and any manufacturer that uses it can be in trouble.

Moreover,“Sea-Doo”is not the name of the manufacturer of the watercrafts. The PWCs are manufactured by Bombardier Recreational Products (BRP) Inc. under the brand name Sea-Doo.

At the same time, Yamaha’s brand name for their watercrafts is WaveRunner.

The confusion around the term “jet ski” is caused by the fact that Kawasaki Jet skis were extremely popular and that led to the name of the brand to become the generic name of watercrafts in general.

Bombardier was the first manufacturer who started producing watercrafts in 1968. Along the years many new competitors appeared (and disappeared) in the industry but Sea-Doo models are still here and are quite popular.

The (US) prices range from $5.399 to $17.099 depending on the model. There are many useful extras and features available for the Sea-Doo watercrafts like the iBR system.

You can also find the cheapest PWCs on the market here, as well as the best 3 seater Jet Ski, Sea-Doo and WaveRunner models here.